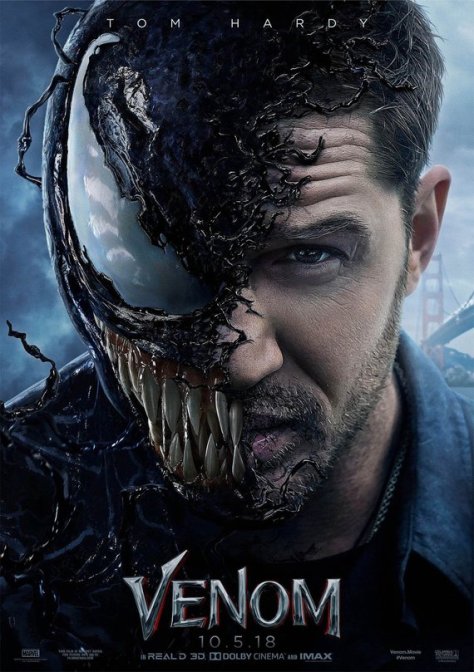 “The world has enough Superheroes.”

A spaceship owned by the Life Foundation – who are not even a little bit evil, really – cashes in Malaysia and an alien lifeform escapes, moving between individuals it uses as hosts. Life Foundation CEO Carlton Drake (Ahmed) recovers four other lifeforms and uses the homeless as subjects to experiment on. Journalist Eddie Brock (Hardy) confronts Drake on this, and Drake has Eddie and his soon-to-be-ex-fiancée Anne (Williams), a lawyer working on a Life Foundation defence case, fired.

END_OF_DOCUMENT_TOKEN_TO_BE_REPLACED 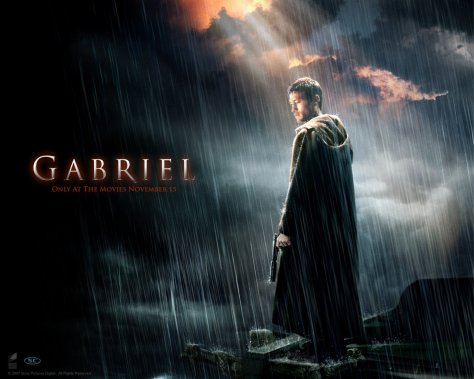 The souls of the dead go either to Heaven, or to Hell, or to Purgatory, here depicted as Gotham City with the shine buffed off, locked in perpetual darkness because the Light is losing the eternal battle over the fate of the city’s souls. The last Arc Angel (sic), Gabriel, is sent down in human form to restore light to Purgatory with a pure heart, dauntless faith, and a pair of silenced .45s, but the Fallen are waiting for him.

Gabriel is one of those films that take elements from successful movies and emulates them badly. The film lifts from The Prophecy, The Matrix, Sin City and Blade, among others, but lacks the money or the talent to pull it off. It’s moody lighting is merely dark, its dramatic music overwhelming and laden with bathos, and its attempted mix of philosophical dialectic and hard-edged profanity comes out swinging wildly from childish potty mouth to dull and incomprehensible rambling. On the rare occasions when the film actually makes a point, it doesn’t seem to know what it is.

There is also an unpleasant aftertaste of misogyny in the fact that the one female Fallen is a pseudo-sapphic bondage queen and the only female Arc, having been beaten by Sammael, is reportedly raped and then forced into prostitution, and survives the slaughter of the other Arcs through pointless apathy.

Sadly, the handful of occasions where the film is actually saying something or getting a shot right are quickly spoiled by incompetent handling.

Oh my, it’s bad. It’s also, despite its level best efforts to be dramatic, dull as paste.

Perhaps the most memorable scene, in a somewhat horrifying way, is the reveal of Asmodeus’ whore, altered by plastic surgery to look like him.

Production values – Much in the vein of the great Albert Pyun, bad movie superstar, Shane Abbess appears to know how to make a good film, he just can’t actually manage to do it. On a limited budget he tries to make something memorable and distinctive, but everything is actually derivative, and by failing to recognise his constraints, he produces something ill-lit, mumbling and confused. 16
Dialogue and performances –  Aside from the odd shouty bit, there isn’t much of note in any of the performances, with lines like ‘hello; how’ve you been’ getting the same level of emotion as ‘you were my brother and you betrayed me’. Still; any more effort would have been wasted on the lines. 18
Plot and execution – A mad jumble of ideas and ideologies, plus some stock bad guy nastiness and misogyny. 17
Randomness – The mishmash of philosophies; the sudden reversals; the redemption sex. 16
Waste of potential – It’s hardly an original or the most promising of concepts, but there is a lot of room to have done this better. 14 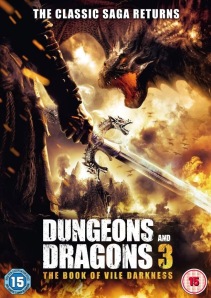 We open with the last of the Knights of the New Sun, an ironically old and defunct holy order who once threw down an evil sorcerer (the opening narration tells us so; with animation) and were the guardians of peace for centuries, but are now an irrelevance in an age when every small town has a curtain wall and a magically-shielded trove of enchanted treasures. Newly anointed knight Grayson takes his vows of duty and chastity, like his father and grandfather before him, but the mystical light show fails to happen, as it has failed to happen for decades, and he is feeling a little blue when the order are attacked by barbarians and wiped out, save for Grayson – who is left for dead – and his father, who is captured.

In pursuit of the barbarians, Grayson gets help from a friendly prostitute, as you do when you’re a paladin. She hooks him up with a magic item seller – a contact that is no doubt of immense use to a small-town whore – who sells him some black armour and a jaggedy sword so that he can disguise himself as a badass. The prostitute – judging by the credits she might be called Carlotta, but names are elusive things in this film, and none of the actors are recognisable enough to narrow it down – then points him towards Akordia, a ruthless witch who is recruiting sell-swords in the service of the barbarians’ master, Shathrax the Mind Flayer.

He does not make the best showing at first, given that the posse of evil bastards are unconvinced by Grayson’s manly swagger. However, by killing one of her existing goons, Grayson wins a place on team evil, alongside Seith the Libertarian Assassin, Bezz the Vermin Lord, and Vimak the enormous black guy with the immense sexual appetite (I think someone slipped and fell on a stereotype). In the hopes of being led to his father he goes with them on their mission for Shathrax, despite knowing that he may have to betray his vows to maintain his cover.

This Fearsome Five head out, slay a dragon, massacre a small town and generally behave badly. Sure, they occasionally stop to discuss philosophy (Seith believes that poor people just exist as somewhere to keep his knives), ambition (Vimak was exiled for being weak and wants to go back and kill everyone who knows about it, although apparently he mostly wants to sleep with a huge number of women simultaneously), to kill each other (even Grayson murders Vimak and lets Seith die), or just to afflict people with bug plagues for the sheer, unadulterated hell of it (Bezz the Vermin Lord digs insects; go figure), but mostly it’s just one bad deed after another. Finally, with most of them dead of friendly fire, they retrieve the cover of the long-lost Book of Vile Darkness from its keeper.

Said keeper, by the way, is a ‘slaymate’; an undead child betrayed and abandoned by her guardians and now subsisting on cruelty and hate. It is very, very creepy. Being allergic to all touchy-feely feels, the Slaymate reveals that Akordia is in love with Grayson after (spoilers) he betrays one of his vows when they have creepy, Red Sonya-ish ‘you saved my life so I must do you’ suddenly-submissive-Amazon, post-dragon slaying sex, which is a phrase almost as uncomfortable to say as the scene of Akordia being all ‘the witchy law says you may ravish me as you desire’ is to watch.

Finally, we reach the castle of Shathrax, who turns out to be a guy with his mouth sewn shut who speaks through two women he keeps on chains, which is creepy, but so not a Mind Flayer. Grayson rescues his father, and when they are cornered his defiant hope kindles his paladin amulet into life (bizarrely in response to his declaring himself a blackguard, which in D&D is an anti-paladin rather than a bounder and a cad). Shock, horror! This turns out to be a trap, as the villains need ‘liquid pain’ extracted from a true knight using a machine clearly knocked off from Count Rugen’s design in The Princess Bride to ink the new Book of Vile Darkness, but Akordia betrays the dark lord for love and light returns.

So, another Dungeons & Dragons movie; more mock heroics and dodgy dragons, and perhaps another chance to see Bruce Payne in purple lipstick chewing on the scenery.

The third D&D movie takes its title and setting from the game line’s controversial Evil Bastard’s Manual, released amid much sound and fury as a ‘mature readers only’ product from the pen of Monte ‘Monte Cook’s World of Darkness’ Cook, introducing rules for sex, drugs and rock and roll (well, drugs and bad magic rituals at least) and making Tracy ‘All thieves must be evil unless they are racially inclined to kleptomania’ Hickman cry.

It has a few decent moments, and some effort clearly went into it, and the evil adventuring party are not only properly evil, there is also a clear division between the Chaotic, Neutral and Lawful Evil members which shows proper commitment to the material.

The Book of Vile Darkness is… bad, but not as bad as the first D&D movie and for different reasons. The attempt at grimdark is partially successful, but Grayson is painfully bland and Akordia not much better and the less said about the awkward stab at sexing up the franchise the better. Seith, Bezz and Vimak are the stars here, since they are clearly having fun, especially Bezz, whose presence seems to be as a reminder that not all evil is Lawful Evil. There are also some nice moments, and even some half-decent dialogue.

All in all, however, if you’re not siting up into the wee small hours waiting for your laundry to finish, there are probably better choices available.

Having murdered the giant Vimak, and needing to make it look as if he ran off with the treasure, Grayson stuffs the corpse into a bag of holding.

Production values – Mediocre, at best. The dragon is pretty clearly CGI and nothing is better than you would see on a TV series; and not a good TV series either. I’m talking the level of Lexx or Cleopatra 2525. Buffy the Vampire Slayer looked this good in the 90s, and today even nuWho would be embarrassed. 15

Dialogue and performances – Mostly pretty lame, although some of the support is good. Bezz the Vermin Lord is an enthusiastic treat, and clearly would have been Bruce Payne if they could have afforded him. The dialogue has a few corkers, but is mostly nothing to write home about, either for good or for ill. 13

Plot and execution – The plot is coherent, at least, and the direction and fight choreography passes the first test of being better than I could have managed. 12

Randomness –  – Pretty well in hand, for the most part, although the fact that a small mountain town has a towering wall, a magical vault and a massive, exotic brothel seemed a little out of left-field. 8

Waste of potential  – Pretty much all it could have been, with what it had to work with. 5