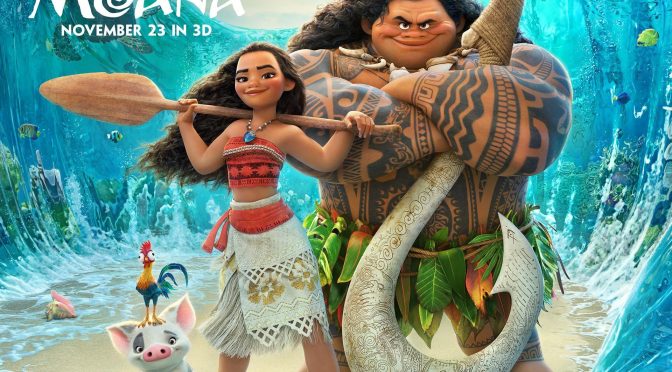 “The Ocean is Calling”

Moana (Cravalho) is the heir apparent to her father, Chief Tui of Motonui (Morrison). Her people live a life contained on their island, which provides all that they need… until the fish leave the sea around the island and the crops and coconuts begin to die. Always adventurous, Moana suggests fishing in the more dangerous waters beyond the reef, and then follows her grandmother’s (House) stories to take a boat from the long-forgotten voyaging past of the tribe, and seek for the demigod Maui (Johnson).

END_OF_DOCUMENT_TOKEN_TO_BE_REPLACED

“Who You Gonna Call?”

When the reemergence of her past involvement with paranormal research leads to the end of Erin Gilbert’s (Wiig) academic career, she unites with her childhood friend Abby (McCarthy), Abby’s new partner Holtzman (McKinnon) and streetwise history buff Patty (Jones) to find, trap and prove the existence of ghosts. As they confront various manifestations, however, they stumble onto the trail of Rowan (Neil Casey), a disaffected genius with a plan to boost the power of ghostly manifestations until the barriers between worlds fall.

END_OF_DOCUMENT_TOKEN_TO_BE_REPLACED 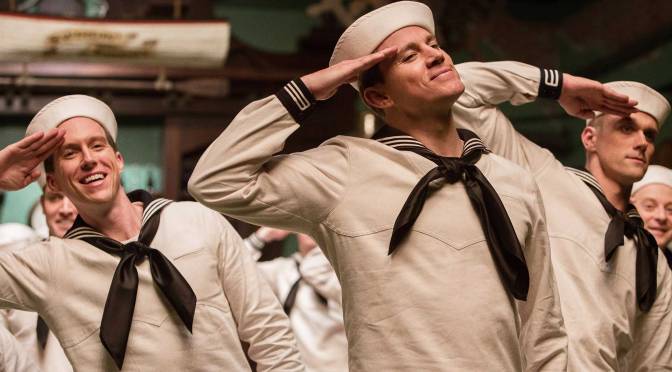 Eddie Mannix (Brolin) is a fixer for Capital Studios, making sure that the productions keep running and the stars stay away from scandals. On a particular day he has to wrangle a star (Clooney) kidnapped by Communists, find a husband for a pregnant starlet (Johansson), deal with a pair of nosy journalists (Tilda Swinton) and a studio leak (Tatum) and persuade a classical director (Fiennes) to work with a cowboy star (Ehrenreich), and at the same time decide whether he’d rather be building airplanes.

END_OF_DOCUMENT_TOKEN_TO_BE_REPLACED

“The Jungle is JUMPIN'”

A young infant is adopted by a family of wolves and named Mowgli (Reitherman), but the pack kick him out when Shere Khan (Sanders) the tiger comes hunting. As his guardian Bagheera the Panther (Cabot!) tries to escort the reluctant Mowgli to the nearest man village, he encounters the insinuating python Kaa (Holloway), the cheerful bear Baloo (Harris) and the mocking monkeys of orangutan King Louis (Prima,) before his final showdown with Shere Khan.

END_OF_DOCUMENT_TOKEN_TO_BE_REPLACED

11 year old Riley (Dias) is uprooted from her home in Minnesota when her Mum (Lane) and Dad (MacLachlan) move with her to San Francisco.  The resulting turmoil is managed by Riley’s emotions, the five personifications – absurdly perky Joy (Poehler), neurotic Fear (Hader), splenetic Anger (Lewis Smith), discerning Disgust (Kaling) and morose Sadness (Phyllis Smith) – who live in her head and regulate her inner life.

END_OF_DOCUMENT_TOKEN_TO_BE_REPLACED

Top CIA agent Napoleon Solo (Cavill), a decorated soldier turned art thief turned agent, extracts Gaby Teller (Vikander), the daughter of a paperclipped and now vanished nuclear physicist, from East Germany, despite the dogged pursuit of near-superhuman KGB operative Ilya Kuryakin (Hammer). With Dr Teller seemingly in the hands of a neo-Nazi criminal organisation run by Alexander (Luca Calvani) and Victoria (Elizabeth Debicki) Vinciguerra, Solo and Kuryakin are ordered to team up and escort Gaby to Rome, where her uncle Rudi (Sylvester Groth) may be able to lead them to her father.

END_OF_DOCUMENT_TOKEN_TO_BE_REPLACED

“The Colour Out of Space” is widely regarded as one of Lovecraft’s best stories, and despite its tricky content it’s been filmed several times. Check out our reviews of Colour from the Dark and Die, Monster, Die!

Huan Vu’s adaptation follows the basic structure of Lovecraft’s story, except that instead of a researcher on an unrelated mission, Jonathan Davis (Heise) is looking for his missing father, who he believes is in a small town in Germany he visited at the end of the Second World War. When he gets there, he slowly begins to uncover the tale of the meteorite and its effects.

END_OF_DOCUMENT_TOKEN_TO_BE_REPLACED

Written in 1930 and published in 1931, “The Whisperer in Darkness” tells the tale of Albert Wilmarth, a professor at good ol’ Miskatonic University who is initially skeptical of claims that alien beings inhabit remote Vermont hills. He gets into correspondence with a farmer, Henry Akeley, who claims to have proof. The evidence becomes more and more convincing — but suddenly, Akeley tells Wilmarth that he got it all wrong and invites him to visit him in Vermont. And don’t forget to bring all the evidence! It’s a trap, from which Wilmarth barely escapes, but the real centre of the story is the scene where Wilmarth sits in a darkened room, talking to Akeley and gradually starting to realise that all is not as it seems.

The HPLHS’s previous project, The Call of Cthulhu, was a very story-accurate adaptation of the tale into a silent film. Here, they’ve tried to turn the story into something more like a Universal film of the 1930s, which means adding quite a lot of new material. There’s a debate with Charles Fort (Leman) at the beginning and a long, slam-bang action sequence at the end, together with the setup of a group of … well, of Call of Cthulhu investigators that never really goes anywhere. The aliens themselves are represented by some pretty ropey effects, and you can see how much the earlier film benefited from its intentionally stylised look.

END_OF_DOCUMENT_TOKEN_TO_BE_REPLACED 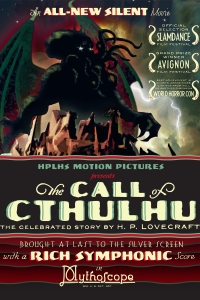 “The celebrated story by H.P. Lovecraft brought at last to the silver screen.”

“The Call of Cthulhu” is one of Lovecraft’s best-known stories. Our narrator inherits a collection of his late uncle’s notes and through them reconstructs the story of the barely-averted rising of Cthulhu, a monstrous being trapped beneath the sea. The whole story occurs in fragments — only the narrator, and by extension the reader, actually perceives the world-threatening scope of the monstrous secret. Its opening paragraph is one of the most famous things Lovecraft ever wrote.

Seriously, this is probably the most story-faithful adaptation of a Lovecraft film we’ve seen yet. The HP Lovecraft Historical Society have always been exacting about their period detail — clue’s in the name — and they’ve even gone to the length of making the film as a black-and-white silent movie, as if it were made in the mid-late 1920s when the story was published. It’s an extreme stance in the period vs contemporary debate, all right, and it’s certainly something we haven’t seen before.

END_OF_DOCUMENT_TOKEN_TO_BE_REPLACED

When huge monsters known as Kaiju emerge from an interdimensional rift in the floor of the Pacific Ocean, humanity unites to create a defence; colossal battle mechs called Jaegers, whose pilots become the new rock stars.