“Two worlds. One future.” (The English taglines are a real letdown compared to the French ‘And if love were stronger than gravity?’)

Adam and Eden are childhood sweethearts, pulled apart by false accusations, different social status, and the fact that they live on opposing planets in a binary world in which any given thing is only subject to the gravity of one world.

END_OF_DOCUMENT_TOKEN_TO_BE_REPLACED

“The British Empire Strikes Back”

Dad’s Army, by Jimmy Croft and David Perry, is perhaps the most beloved and enduring of Britain’s classic sitcoms.

Set in the seaside town of Walmington-on-Sea, the series told the story of the local Home Guard platoon, who for nine years engaged in scrapes and shenanigans more or sometimes less war related, from camouflage exercises, to hunting down escaped IRA operatives, to capturing enemy parachutists and submariners. The writers and the characters became national treasures, the series continues to be repeated long after the morbid passtime of calling out which of the actors had since died during the closing credits became monotonous, and a scene in which a German prisoner asks for the name of the youngest platoon member, only to be cut off by Mainwaring’s sharp “Don’t tell him, Pike!” was voted the nation’s favourite comedy line over many more recent offerings.

Often conceived as ‘cosy’, Dad’s Army was pretty racy for its time, with about half the characters engaged in extramarital affairs. It revived the Home Guard in the national memory, launched a thousand catchphrases and while ostensibly focused on the comedy of old men and boys playing soldiers, never failed to present its protagonists as intelligent, good-hearted and courageous. With a run almost unprecedented in the history of British sitcoms, it established unusually rich characters in a full and developed world.

There was also a 1971 film, which remade the early episodes about the formation of the platoon, and added a hostage rescue with German airmen invading the church hall.

In 1944, the Walmington-on-Sea Home Guard platoon still diligently guard their little stretch of the south coast, under the command of Captain Mainwaring (Jones) and the leadership of Sergeant Wilson (Nighy). The arrival of glamorous reporter Rose Winters (Zeta-Jones) throws the platoon into a spin, provoking the jealousy and ire of the women of the town as the men prove once more the claim of Cleopatra, that all men are fools and what makes them so is beauty like what she has got.

END_OF_DOCUMENT_TOKEN_TO_BE_REPLACED

In 15th century Spain, a group of Assassins set out to protect the son of the last Sultan of Granada, in order to prevent Torquemada, Grand Master of the Spanish Inquisition, extorting from the Sultan the Apple of Eden, which contains the genetic blueprint for free will. As their meeting is interrupted by the neighbours’ garage band rehearsing, we jump to 1986, where adventurous (we know this because he’s practicing some daredevil shit on his BMX) Callum Lynch finds that his father (Brian Gleeson) has murdered his mother. He flees as be-sunglassed goons converge on their home, and in 2016 is in prison awaiting execution.

We’re about five minutes in and we’ve already covered about five centuries.

END_OF_DOCUMENT_TOKEN_TO_BE_REPLACED 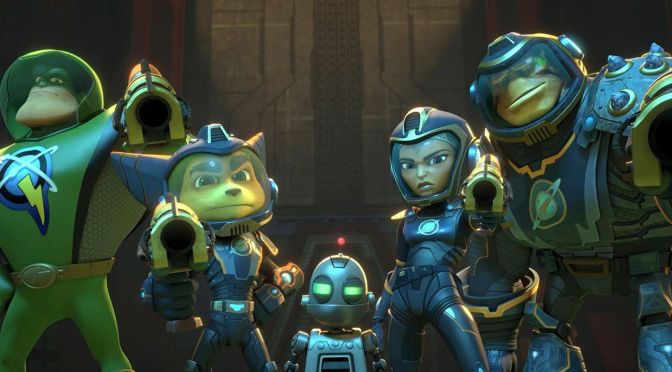 When the villainous Chairman Drek (Giamatti) and his Blarg start destroying planets, the Galactic Rangers announce that they are upping their numbers… to five. Ratchet (Taylor) is a young mechanic who dreams of joining the corps. Their leader, Captain Qwark (Ward), bounces him from the recruiting line, but when he partners up with a defective Blarg warbot named Clank (Kaye) they become heroes and are – reluctantly – accepted into the Rangers, alongside Qwark and his comrades, the quick one (Thorne), the techy one (Dawson) and the big one (Taylor).

END_OF_DOCUMENT_TOKEN_TO_BE_REPLACED 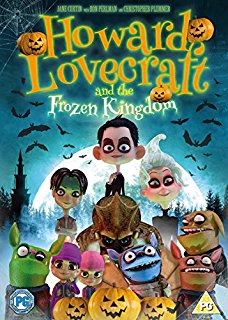 “For Howard, things are about to get R’lyeh crazy.”

Howard Lovecraft (Kiefer O’Reilly) is a melancholy boy, troubled by his father’s descent into madness, which has left as his only caregiver a mother who thinks that taking a small child to visit his dangerously unstable father in an Arkhamesque asylum (it may in fact be the original Arkham Asylum) run by dodgy occultist snarkmeister Dr West (Plummer) is a grand plan. Likewise replacing a bedtime story with just handing him his father’s journal of increasingly deranged scribblings to read as he goes to sleep.

END_OF_DOCUMENT_TOKEN_TO_BE_REPLACED

“Danger is Real. Fear is a Choice.”

In the future, humanity has abandoned the ruin of Earth for the paradisical climes of Nova Prime. The evacuation was led by the United Ranger Corps, who later became the only line of defence against an alien aggressor who deployed as their first line of attack a breed of monsters that hunted humans by smelling their fear: the Ursa. To fight these creatures, the Prime Commander Cypher Raige (Smith) developed the ability to feel no fear, a technique known as ‘ghosting’.

END_OF_DOCUMENT_TOKEN_TO_BE_REPLACED

Jake Portman (Butterfield) is a regular American (honest) loser, who connects better with his grandfather Abe (Stamp) than with his father (O’Dowd). When Abe dies, an apparent victim of a wild dog attack, and Jake believes that he sees a faceless giant looming in the bushes, his psychiatrist (Janney) suggests that it would do him good to go to the island in north Wales where his grandfather once lived in a children’s home, run – he always insisted to Jake – by a woman named Miss Peregrine who could turn into a bird, for the protection of children with extraordinary powers.

END_OF_DOCUMENT_TOKEN_TO_BE_REPLACED

“You Know His Name”

Based – really loosely – on a novel by Robert Ludlum, 2002’s The Bourne Identity kinda sorta changed the nature of the espionage action movie… I won’t say completely and forever, but substantially and in ways that are still felt today. It brought a harder edge to action with its brutal fight scenes and jarringly intimate, naturalistic camerawork. The franchise made star Matt Damon into a megastar as Jason Bourne, an amnesiac assassin turned into the perfect weapon by a CIA program called Treadstone. It was followed by the increasingly loose adaptations The Bourne Supremacy (2004) and The Bourne Ultimatum (2007) and then in 2012 by The Bourne Legacy, with Jeremy Renner’s Aaron Cross replacing Matt Damon’s Jason Bourne in what was intended to be the start of a new chapter in the series. After the lacklustre box office and critical response of Legacy, the series returned to type, lead and director with 2016’s Jason Bourne.

Series veteran Nicky Parsons (Stiles), hacks a CIA black ops database for information on its ongoing program of superspies and other shenanigans. With cyber-ops supremo Heather Lee (Vikander) on her trail, Parsons contacts Bourne to arrange a meet in Athens during a riot.

END_OF_DOCUMENT_TOKEN_TO_BE_REPLACED

“A battle for honor. A bloodshed for vengeance.”

The Ako incident was a historical event in feudal Japan, in which the forty-seven surviving retainers of Lord Asano Naganori took bloody revenge on the Imperial courtier who had their master dishonoured and executed. Fictionalised accounts of the event, known collectively as Chushingura, are a staple of Japanese literature, to the point that the true and fictional versions are difficult to disentangle. Hollywood finally copped to the story in 2013’s 47 Ronin. This film starred Keanu Reeves as the obligatory white character, although the rest of the cast was Japanese, and added fantastical elements. In 2015, a reimagining of the story was produced, with few Japanese cast and a mediaeval European aesthetic, but a Japanese director.

After a great war, an order of warriors emerged to protect an Empire, the Knights of the Seventh Rank.

Led by Commander Raiden (Owen), the retainers of Lord Bartok  (Freeman) exemplify the code and honour of the knights in a time when they are in decline, with the Empire increasingly under the grasping hand of corrupt Minister Geza Mot (Hennie). Denied a bribe, Mot goads Bartok into striking him in order to have him executed and dishonoured, his retainers scattered and his family dispossessed.

END_OF_DOCUMENT_TOKEN_TO_BE_REPLACED

Meticulous hitman Arthur Bishop (Bronson) tries to intercede with the organisation on behalf of his mentor Big Harry (Wynn), but instead finds himself tasked with Harry’s assassination. From a mixture of loneliness and guilt, he takes Harry’s son Steve (Vincent) under his wing and begins to train the reckless boy as a ‘mechanic’.