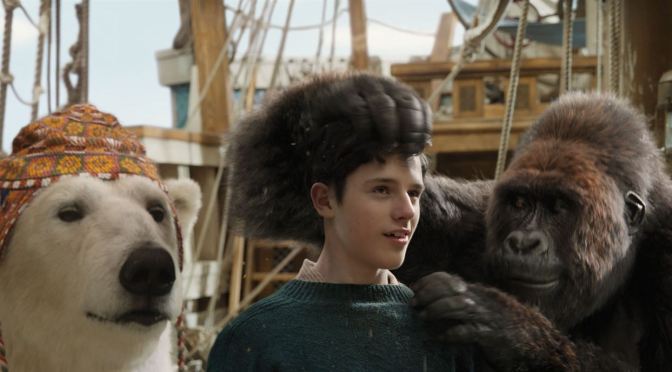 “He’s just not a people person”

Dr John Dolittle (Downey Jr.) is a doctor who can talk to animals, and who – together with his wife, Lily (Kasia Smutniak) – travels the world, rescuing animals and bringing them back to a sanctuary granted to them by a grateful Queen Victoria (Jessie Buckley). After Lily is killed in an animated sailing incident, Dolittle becomes a recluse, until his parrot Polynesia (Thompson) leads young Stubbins (Collett) into the grounds with injured squirrel Kevin (Robinson), on the same day that Lady Rose (Carmel Laniado) enters the estate to summon Dolittle to attend the desperately ill Queen.

Discovering that the Queen has been poisoned, Dolittle sets out with his animal chums – Chee-Chee the gorilla (Malek), Yoshi the polar bear (Cena), Plimpton the ostrich (Nanjiani) and Dab-Dab the duck (Spencer) – to retrieve the near-mythical antidote that his wife was seeking when she died, while Betsy the giraffe (Gomez) and Tutu the fox (Cotillard) retrieve Stubbins in the hope that human company will be good for Dolittle, and Jip the dog (Holland) and Lady Rose keep watch on the Queen.

Pursued by his lifelong rival Mudfly (Sheen), Dolittle retrieves his wif’s journal from her childhood home, Monteverde (which is of course the Spanish for ‘basically Tortuga from Pirates of the Caribbean but without the obvious prostitutes,) where her father Rassouli (Banderas) is pirate king. Mudfly steals the journal and destroys their ship, but having previously tried to feed Dolittle to his tiger, Barry (Fiennes), Rassouli has a change of heart and gives them a ship to reach the Island of the Eden Tree, where there is a dragon (de la Tour), some killings, some fart gags and ultimately a happy ending for everyone but the Queen’s treacherous minister Lord Thomas Badgley (Jim Broadbent) and Mudfly, who is savaged to death by bats in a cave after breaking both his legs.

I have complex, and non-positive, feelings regarding the juxtaposition of the majestic dignity of the dragon and the purile bathos of the fart gag.

‘We have no choice but to embark on this perilous journey,’ says Dolittle, deciding on discovering that the Queen was poisoned with a widely known British plant that clearly this calls for a quest beyond the known world. I mean, fair play, he probably wants any excuse to go after his dead missus, but trying to pass of deadly nightshade as some foreign exotic is a bit of a blag.

Is Dolittle’s father in law supposed to be a scant half a decade his senior, or are we to assume that loss has aged him terribly? Seriously, since Queen Victoria gifted them the estate, and since there’s no sign of Albert or any royal children, it’s been four years at the absolute outside, three really, since Edward VII will be born in 41 and aconite poisoning would almost certainly cause Victoria to lose any child she was carrying, even if Albert were just overseas somewhere for the duration (which would frankly seem out of character.)

The three significant human women in the film are, in no particular order, dead, comatose and a nursemaid/highly unlikely love interest.

Once you get into the film, it is possible to work out that Dolittle’s accent is supposed to be Welsh, but it does take working out.

And why are so many of the animals American, when basically none of them are American animals? I guess the polar bear could be Alaskan, but that is not a Californian gorilla.

Badgley seems determined to become King on Victoria’s death, which seems an odd ambition for someone who is in no way Victoria’s heir presumptive. (That would be the Duke of Cumberland.) The British monarchy may be an anachronistic shambles, but it is not awarded by the right of bagsy.

I mean, that is a striking cast list. Very Avengers-y, down to the presence of Tom Holland as Downey Jr.’s sidekick. Michael Sheen deserves so much more than cardboard cutout baddy.

Despite the island of Hispanic pirates, the film is way less racist than the book, and it does at least have female characters who aren’t birds.

Dolittle is a bit of a mess. Its individual parts are enjoyable enough, and Downey Jr. carries it with the kind of energy that suggests a bit of a passion project, but the whole is uneven and the cartoonish villains and life and death straits somewhat at odds with the whimsical core premise and the running gag where Dab-Dab the duck confuses vegetables for surgical tools.

The dragon is prett left-field, but she looks good, and I always have time for monsters played by very proper, British character actors.

Production values – Monteverde looks oddly like a model, but in a film like this it comes down to the animals, and the animals… are good. 8
Dialogue and performances – The script is nothing to write home about, but the cast is excellent and committed well beyond the desert of the material. 9
Plot and execution – There is a lot going on here, and there doesn’t necessarily need to be. The conflict with Rassouli is just marking time. 12
Randomness – Deadly nightshade? 7
Waste of potential – I mean, I don’t know. I loved the book as a kid, but it was… problematic. On the other hand, this is a lot of talent to make something so… okay. 12 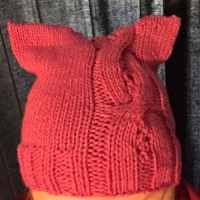