Our Christopher Lee retrospective continues here on BMM, as we celebrate the great man’s career with a guide to all the many different times he glared intently at Peter Cushing and boomed some hard-sounding shit that, on sober reflection, didn’t necessarily make a whole lot of sense. Or perhaps I’m just referring to this film, 1965’s The Skull: 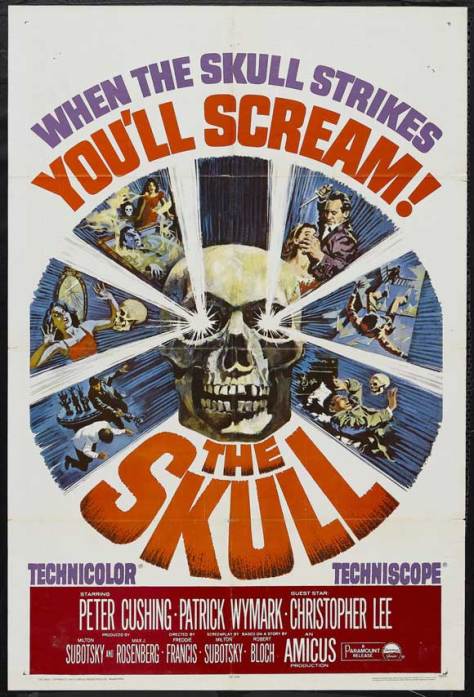 “When the skull strikes, you’ll scream!”

Back in 18-umpty-ump, a phrenologist digs up a grave, steals the corpse’s head and defleshes the skull. But he promptly dies in a tragic but totally-foreseeable skull-defleshing accident.

Flash forward to swinging London, where Christopher Maitland and Matthew Phillips (Cushing and Lee) are collectors of occult artefacts. Shady antiquities dealer Marco (Wymark) turns up with the skull for sale; he offers it to Maitland, claiming that it’s the skull of the infamous Marquis de Sade. Maitland turns him down, but gradually he becomes fascinated, especially when it appears that the skull was actually stolen from Phillips, who is convinced that it actually contains an evil spirit.

It does. And also there’s a cult of weirdos who dress up like judges and make people play Russian roulette. Or maybe it’s just a dream. And Marco gets murdered, leaving Maitland with the skull. Eventually the skull keeps trying to get Cushing to kill his wife (Bennett) but he doesn’t, and instead he kills himself– or does he?!

He doesn’t; it was the skull.

Also, the auctioneer at the beginning is Michael Gough!

The Marquis de Sade is one of those historical figures completely overtaken by his own legend. You can make as many Quills as you like, it won’t stop people associating him with Satanism at this stage, any more than you’ll convince them that the Friars of St Francis of Medenham were basically liberal academics who like to extend their liberality to their carousing habits, rather than demon-ridden serial killers.

In two words: Peter Cushing, who gets to stroll around for half the film looking suave and a little sinister and spend the other half acting mad as a bat. Also Christopher Lee, who glares intensely and says ominous things but also just hangs out and plays snooker and smokes cigars; it’s actually quite a clever little change-up.

Excellent use is made of Lee’s intrinsic gravitas by having his character look vulnerable when he’s losing control to the skull. When Christopher Lee looks worried, you know shit’s about to get real.

Aw, it’s OK. The plot is flimsy and sensational — the new moon is “the time of devil worship and black magic,” don’tcha know — but the acting is good and some of the skull haunting effects are novel and creepy.

Hands down, it’s the interlude in which two tough-looking dudes pretending to be cops kidnap Maitland and throw him into a big room in front of a silent man dressed as a judge whose desk is covered in skulls and various other diabolical tat. They make him play Russian roulette — again, all in mime — and then throw him into a red-painted corridor that floods with gas. He later claims this was a dream, but we never get to see whether that’s true. Dream or not, it’s totally bizarre and, as far as I can tell, totally unrelated to the rest of the film. It’s like they had ten minutes of an unfinished David Lynch film lying around so they just slapped it in the middle.

Production values Nothing out of the ordinary, but intelligent and well-executed stock 60s horror. 7
Dialogue and performances Mostly excellent. Peter Cushing’s I’m going maaaaaaad face is worth the price of admission. 5
Plot and execution I’m not wholly convinced. 14
Randomness The hell? 16
Waste of potential I have not read the Robert Bloch story this is based on; maybe it’s genius. Maybe it’s not. 10